aaa
Q As-salamu Alaykum. l am a new Muslim. l got something which I do not fully understand. Why does a Muslim woman have to cover her head if her heart is clean and honest? Time has been changed, a woman can be modest with proper dress. A woman will get more attention with covering in China. People regard this as a kind of "discrimination" here, because man will look at a woman if she is very pretty, this will never be changed. So it is not enough just to cover her head if her face is still showing outside! It is unfair that a woman has to cover her head just because of man! At the same time, a uncovering Muslim woman will be regarded as "not good". Why is it not enough as long as her heart is clean and honest and dress properly? Why does she have to cover her head if she doesn't want to? Thanks a lot! Allah Hafiz.

First of all, we would like to confirm that a sound and sincere heart is the most important thing a Muslim must strive to have, as only God knows the real intentions of each person, and it is only a sound and pure heart which Allah accepts on the Day of Judgment.

Allah the Almighty says in the Quran what means:

{And abase me not on the day when they are raised. The day when wealth and sons avail not (any man). Save him who bringeth unto Allah a whole heart.} (Al-Shuaraa, 26:87-89)

Prophet Muhammad, peace and blessings be upon him, said:

“Deeds (their correctness and rewards) depend upon intentions, and every person gets but what he has intended.“ (Al-Bukhari)

Performing good deeds is the believer’s way of proving their dedication to God. It is inexcusable for a person to insist that he or she is a good person but engages in activities that are explicitly prohibited in the Quran.

Performing good deeds should also be done for the sake of Allah, and not to demonstrate some air of superiority in his/her relation to others or for worldly recognition. Though it may be tempting to do the same to please another human being for example, a believer’s intentions should be tailored to please God only.

So, a Muslim woman who is only fulfilling the criteria of Islamic clothes is observing hijab in a limited sense. Hijab of the clothes should be accompanied by controlling one’s actions, eyes, heart, thoughts, and intentions. Therefore, the hypocritical use of hijab is not a good example of Muslim conduct.

Furthermore, Islam means “submission to Allah” and we trust that what He orders us to do is for our own good. We have to learn to obey, even when we don’t see the wisdom in His commands. We have to always remember that He created us and knows better than any of us what is good for us. To think otherwise would be arrogant and tantamount to making ourselves equal to Him.

{Tell the believing men to lower their gaze and be modest. That is purer for them. Lo! Allah is Aware of what they do. And tell the believing women to lower their gaze and be modest, and to display of their adornment only that which is apparent, and to draw their veils over their bosoms, and not to reveal their adornment save to their own husbands or fathers or husbands fathers, or their sons or their husbands’ sons, or their brothers or their brothers’ sons or sisters’ sons, or their women, or their slaves, or male attendants who lack vigor, or children who know naught of women’s nakedness. And let them not stamp their feet so as to reveal what they hide of their adornment. And turn unto Allah together, O believers, in order that ye may succeed.} (An-Nur 24:30–31)

In response to your comment “it is unfair that a woman has to cover her head just because of man”, it’s important here to draw attention to the fact that the order to lower the gaze was given to men first. Many men conveniently forget that.

Yes, people may stare at a Muslim woman in hijab because she looks different from them. But better to be stared at for being different than for exposing some flesh for the sake of fashion.

Yes, she may get treated differently, but so what? If we are ill-treated or persecuted, so were the first Muslims. Don’t we get rewarded for being patient in the face of persecution for the sake of Allah? And if people treat a Muslim woman with a bit more respect for wearing hijab, what’s wrong with 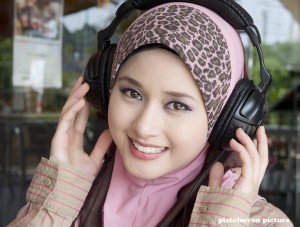 The assumption that this command from God to Muslim women to wear hijab is regarded as an insult to non-Muslim women, and that it accuses them of not having self respect seems to be the furthest from the truth.

Hijab is a type of uniform prescribed in the Quran to cover all the head and body except for the face and the two hands, and is neither tight nor transparent, is only decreed on Muslim women for logical reasons. Therefore, we see no point in non-Muslin women getting offended or insulted by this decree which was not directed to them.

So, our advice to you dear sister is that you should pray to Allah to strengthen your faith and to help you obey Him. Be proud to be a Muslim and proud to walk on the straight path.