aaa
Q Salam. I want to convert my religion to Islam as I love this religion since childhood and many of my friends are Muslims. I know the first kalima, but I don't know how to convert and I am jobless and homeless. Is there any facility available for a few days where I can accept Islam and get a job somewhere so I can survive as my parents won’t allow me after converting to Islam.

Thank you very much for your question and for contacting Ask About Islam.

We pray to Allah Almighty to help you and guide you in your search for the truth of Islam.

The word “Muslim” means one who submits to the will of God, irrespective of their race, color or nationality.

Becoming a Muslim is a simple and easy process that requires no pre-conditions; it is a spiritual transformation that automatically takes place within the soul of a person.

However, outwardly a person becomes a Muslim, when he or she bears witness to the truth of Islam in the presence of others.

All the same, those who adopt Islam as their religion can register themselves as Muslims with the concerned official agency, as this procedure will be helpful for them in many matters, including marriage, and the possibility of performing Hajj (Pilgrimage) and Umrah.

In fact becoming a Muslim, as indicated above, is very easy and there is no complex ritual or practice about it.

If anyone is strongly convinced that Islam is the true religion ordained by God, then he/she should take the Shahadah.

The Shahadah is as follows:

The first part of the Shahadah is the acknowledgement that there is no one worthy of our whole-hearted devotion and unconditional obedience except Allah who is the One and Only God of the universe.

The second part is the acceptance that Muhammad, peace be upon him, is the Servant and Messenger of Allah.

You may take the Shahadah in the presence of an Imam (i.e the one who leads prayers in a mosque) or a couple of Muslims preferably in an Islamic Center.

It is good that you accept a Muslim name (though it’s not a must) and take the steps to make the necessary changes in the official records.

And once you take the Shahadah, you should be ready to follow the teachings of Islam as contained in the Quran and the Sunnah (Example of Prophet Muhammad, peace be upon him).

The Shahadah is the first and the most important of the five pillars of Islam.

With the outward expression of this testimony with sincere belief and conviction, one enters the fold of Islam.

As one enters the fold of Islam purely seeking the Pleasure of God, all of one’s previous sins are forgiven, and one can start a new life of piety and righteousness. And such a person’s record is clean, and it is as if he was just born from his mother’s womb.

One should try as much as possible to keep his records clean and strive to enrich his life with as many good deeds as possible.

As for changing one’s name, it is not a necessary factor in embracing Islam, although many people choose to use Muslim names as the sign of their new identity.

If one’s name contains some suggestion of meaning

opposed to the tenets of Islam, then changing it becomes obligatory.

Otherwise one may keep one’s old name if one so desires. But one should not change the name of one’s family or father’s name that usually follows one’s personal name such as the “last” name, in order not to blur the familial lineage.

God in the Holy Quran stresses the importance of humans following Islam:

{If anyone desires a religion other than Islam, never will it be accepted of him; and in the Hereafter, he will be in the ranks of those who have lost (their selves in the Hellfire).} (Quran 3:85)

This means that all forms of worship must be directed to God and to God alone. And so worship is not just the ritual performance of deeds commanded by God, but the whole of one’s life, which is sincerely lived in accordance with the will of God.

The second part of the Shahadah implies that one follows the teachings of Prophet Muhammad, peace be upon him.

One must believe in what the Prophet has said, practice his teachings and avoid what he has forbidden, as all the teachings of the Prophet were in fact revelations and inspirations conveyed to him by God.

The foregoing means that to truly adhere to the second part of the Shahadah one must follow the Prophet’s example in all walks of life.

After your declaration of the testimony of faith, you need to learn more about Islam, by attending the classes by religious teachers or by reading authentic books on Islam and by visiting good Islamic websites.

Once you accept the right creeds and start performing the religious duties of a Muslim, you should also take care to observe the following in your life:

Be honest and truthful; be fair and just; be charitable and helpful to others; avoid all evil things and practices; give good advice to people wherever and whenever you can.

And do not forget to:

Pray for Allah’s help in all things, under all circumstances; give thanks to Allah and praise Him for all the blessings, and remain prayerfully patient in suffering and misfortune; depend on Allah’s Mercy; seek His forgiveness.

Be constantly conscious of Allah, know He is ever watchful.

Read the Quran, study it and learn the Hadiths as much as you can.

Remember that the intention behind your actions is very important. So, wherever you are about to do something, think for a moment, whether it is something that Allah would bless or something Allah is displeased with.

You should direct all your actions to Allah Almighty, for His acceptance and reward. 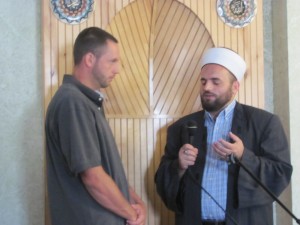 Do the above to the best of your ability: and if you do so, Allah will admit you to Paradise.

To access online Quran, you can for instance visit this site: http://quran.com or http://tanzil.info/

Here you find the chapters of the Qur’an listed from the first to the 114th. Click on each chapter headings for the translation.

You will find here the Quran translated into many languages including Tamil and Malayalam.

And you may read books that give a good introduction to Islam such as this one by Suzanne Haneef: What Everyone should Know about Islam and Muslims.

As for your question regarding facility for your initiation and learning, it would be most convenient if you contact an Islamic Center or a Muslim organization in your area.

Your Muslim friends can help you in this matter.

May Allah Almighty bless you and guide you in your efforts to lead a life in Islam!

I hope this helps and please keep in touch.

New Muslims – All You Need in Your New Life