aaa
Q I am searching for women who would answer me some questions about the hijab? My theme of my graduation is "the veil of Muslim women". I have difficulties to find women in Arabic countries, who would like to answer my questions by e-mail. I would be glad to hear from you soon. Thank you and kind regards.

I also thank you for your trust and hoping that I can provide you with a suitable answer about hijab.

I also assure you that I am ready to interact with you about this topic through my e-mail, which I will provide you through a personal e-mail message.

Answering the following points will lead both of us to have a general and fulfilling idea about the subject:

{Tell the believing men to lower their gaze and be modest. That is purer for them. Lo! Allah is Aware of what they do. And tell the believing women to lower their gaze and be modest, and to display of their adornment only that which is apparent, and to draw their veils over their bosoms, and not to reveal their adornment save to their own husbands or fathers or husbands’ fathers, or their sons or their husbands’ sons, or their brothers or their brothers’ sons or sisters’ sons, or their women, or their slaves, or male attendants who lack vigor, or children who know naught of women’s nakedness. And let them not stamp their feet so as to reveal what they hide of their 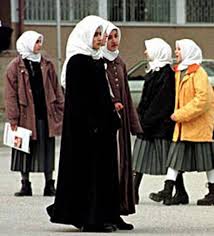 adornment. And turn unto Allah together, O believers, in order that ye may succeed.}

These verses clearly reveal the idea that a Muslim woman should wear her hijab according to God’s commands. I need here to confirm a point that even that in the previous verses the word hijab was not spelled out in the first place, but Allah Almighty stated ‘good behaviors’ as a ‘prerequisite’ to hijab.

Christianity, as well as Islam, figured how important it is for a woman to wear hijab. We can easily see that the nuns are still wearing their own hijab and the society in large see this as a normal condition. Whereas, when it comes to Islam all voices come against the idea itself. It is quite obvious nowadays that hijab is been fought not only refused in some societies.

Why is it Heavenly Legislated to Wear Hijab?

In other words: does it have any effect on the society as a Whole?

When we are discussing hijab, it might come to one’s mind that it’s a kind of marginalization of women, who have to preserve their beauty away from the eyes of all the people except the woman’s husband or some chosen ones of her relatives. But is it really true that hijab causes women to be belittled or marginalized? To be able to answer this question we may look at the advantages of its wearing for both women and society.

Research shows that one of its most important advantages is ‘the security of the society’ that clears it from crimes, rape, incest, harassment in daily life, etc. The other important advantage is for the woman herself who is used to sell her body as if she is a kind of goods that have particular price, not as a woman who has enormous feelings, dignity, and special social status. So, looking only at these two advantages affirms the idea that by taking off their hijab, women become belittled and marginalized, and social crimes are really caused removing it. In other simple words, women have got rid of the cause of their safety. 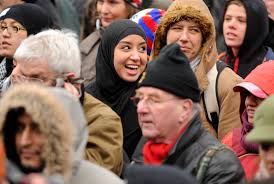 This is in short an idea about the importance of hijab to both women and the society. You can read more in the links provided before and we can discuss it further through personal e-mails. Please do not hesitate to contact us again in case you feel you need to do so. Thank you again for your question and waiting for your feedback.