Michael H. Hart, the American author of The Hundred: A Ranking of the Most Influential Persons in History, called Muhammad (peace be upon him) “the only man in history who was supremely successful on both the religious and secular levels.” To this, one can add a number of his other unique achievements such as the following:

It was Muhammad alone, among the religious leaders, who could establish a government based on divine guidance for the first time in human history, and that, too, in a land where anarchy had reigned supreme for centuries. He brought law, order, and social justice to a people notorious for endless retaliatory conflicts.

If anyone ever became an unchallenged ruler by divine right, it was Muhammad, and Muhammad alone. While he possessed power as absolute as humanly attainable, he remained ever humbler than any of his followers. He said, “I am merely a servant of God and I have been sent only as a teacher.”

There never was such an unlettered man who put the wisdom of the scholars of all the later generations to shame. And there never was a religious leader like him who was so “modern” in his attitudes and policies. He condemned racism and nationalism; he established laws to protect animals, trees, and the environment; he established workers’ rights and banned interest.

In a brief span of 23 years of his prophetic life, Muhammad (peace be upon him) was able to transform the faith, morality, daily life, and the very mindset of all the varied tribes of Arabia. Within a hundred years his message had changed the hearts and lives of millions in different parts of the world. 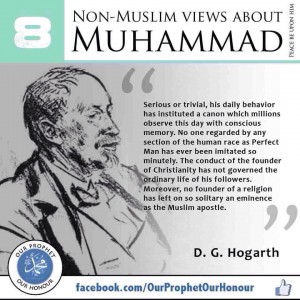 The details of the Prophet’s personal life such as how he ate, drank, washed himself, and so on, can be learned from the volumes of Hadith, which form a treasure for such information on his lifestyle.

Indeed, it would be impossible to give on this page a detailed account of the varied aspects of the personality of the man Muhammad (peace be upon him). Therefore, I would content myself by highlighting here just a few aspects of his personal life.

The Prophet was taller than average, of strong physical build; he was fair of complexion, had a prominent forehead, along with long and thick eyelashes. His face was genial and had a very attractive and pleasant smile.

When he spoke, he spoke to the purpose or else he kept quiet. He was the first to greet a person; and he was not the first to withdraw his hand from a handshake.

He never liked people paying him too much respect and prohibited them from standing up when he entered. He visited the poor and the ailing and advised the Muslims to do likewise. He invited the poorest of the poor to partake of his scanty meal.

“He always joined in household work and would at times mend his clothes, cobble his shoes, and sweep the floor. He would milk, tether, and feed his animals and do the household shopping” (Al-Bukhari)

The Prophet (peace be upon him) was of very clean habits and used to brush his teeth five times a day, before each of the daily Prayers. After midnight he used to get up for the Tahajjud Prayers (optional late night Prayer) which he never missed in his life (Al-Bukhari).

He was not fastidious about his bed; sometimes he slept on his cot, sometimes on an ordinary mattress, and sometimes on the ground (Al-Zarqani).

He was gentle and kindhearted, always ready to overlook the faults of others. Politeness, generosity, simplicity, and sincerity were the hallmarks of his character. 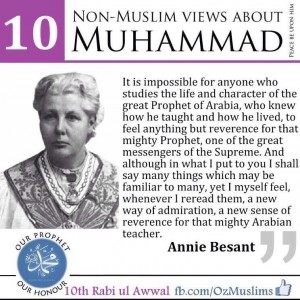 In dispensing justice, he was firm, but his severity was tempered with compassion. His charming manners won him the affection of his followers.

Though he was the Messenger of Allah, and virtually became the ruler of Arabia, he never was proud, and never did he assume any air of superiority. Fear of Allah and humility were deeply ingrained in his heart.

He always received people with courtesy and showed respect to older people. He said, “To honor an old man is to show respect to Allah.”

He was very kind to animals. Once during a journey, somebody picked up some bird’s eggs. The bird’s painful note and fluttering attracted the attention of the Prophet (peace be upon him), who asked the man to replace the eggs (Al-Bukhari).

Also as his army marched towards Makkah to conquer it, they passed a female dog with puppies. The Prophet (peace be upon him) not only gave orders that they should not be disturbed, but posted a man to see that this was done.

The Prophet loved the company of the poor people; and he used to pray:

“O Allah, keep me poor in my life and at my death, and raise me at resurrection among those who are poor” (An-Nasa’i)

His house was a hut with walls of unbaked clay and a thatched roof of palm leaves covered by camel skin. He used to sleep on a rough mattress. Once his disciples noticed its imprint on his back. They wished to give him a soft bed, but he declined the offer, saying: “What have I to do with worldly things? My connection with the world is like that of a traveler resting for a while underneath the shade of a tree and then moving on.”

He advised the people to live simple lives and himself practiced great austerities. When he died there was nothing in his house except a few seeds of barley left from a mound of the grain (Al-Bukhari). 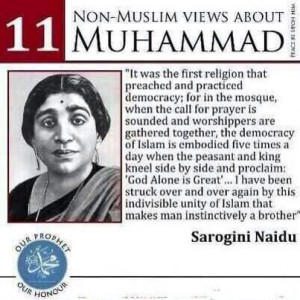 The Prophet said about himself:

“Allah has sent me as messenger so that I may demonstrate perfection of character, refinement of manners, and loftiness of deportment” (Imam Malik)

And when he died, he did not leave a cent, nor any property except his white mule, his weapons, and a piece of land which he had dedicated for the good of the community (Al-Bukhari).

{You have indeed in the Messenger of God [Muhammad] a beautiful pattern [of conduct] for anyone whose hope is God and the Final Day.} (Al-Ahzab 33:21)

I hope this is quite informative. May Allah the Merciful make us all worthy of being the sincere followers of Muhammad (peace be upon him). Thank you and please keep in touch.