Much has been written on Islam and human rights. What today is referred to as human rights has roots, going back far further than you suggest. However, it has been known under other names, such as “natural rights” or “the rights of Man”.

In Western scholarship, the distinguishing characteristic of human rights is that of laws, which are enacted to confer the same right on all people in a state.

As such, for example, the Encyclopedia Britannica traces the first codification of universal rights to a political pact in Spain between a Christian king and the local people, during the time when Muslim influence was very strong.

This happened centuries before the Muslims were eventually completely forced out of the Iberian Peninsula. These rights closely reflect well-established universal rights in Islamic law.

Specifically, the rights to protection of life, property and honor, were contained in this early pact. In Islamic law, these are basic human rights, along with protection of your mind – from anyone imposing doctrines and beliefs on you – and protection of your freedom to practice your religion. The last two rights seem not to have been achievable in 11/12th century Christian Spain, for obvious reasons that ended up with the inquisition.

Before this pact and for most of the time after it, mainstream Europe had two sets of rights – rights for the aristocracy and rights for the common people!

Islamic law established the idea of universal rights from the outset, specifying that justice requires that everyone be treated equally before God’s law:

{O ye who believe! stand out firmly for justice, as witnesses to God, even as against yourselves, or your parents, or your kin, and whether it be (against) rich or poor: for God can best protect both. Follow not the lusts (of your hearts), lest ye swerve, and if ye distort (justice) or decline to do justice, verily God is well acquainted with all that ye do.} (4:135)

Within the framework of Islamic law, there are many things that might be regarded as rights. However, the five rights above define a broad responsibility of the state, which apply regardless of whether the person is Muslim, Christian or whatever religion.

In addition to these rights, further social rights, including rights of maintenance, inheritance etc., can be established within each religious community, in their own way, as is consistent with their religious teachings. In the Islamic civil society, each recognized religious community maintains its own law making institutions. 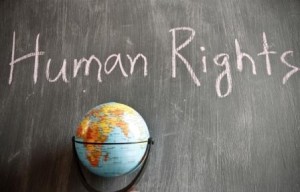 Other human rights, which are considered essential, might easily be argued as being derived from the established principles of Islam. Hashim Kamali’s Freedom of Expression in Islam is a good book, exploring one key right that is often a subject of dispute.