aaa
Q Hello, Dear Scholars. My question is about hijab. The usual question is whether or not it is obligatory. My question is a bit more basic. What Quranic verse or authentic hadith suggests that wearing the head cover is the compulsory? The most popular Quranic quotation relating to hijab, which is often quoted is An-Nur 24:31, which doesn't explicitly say that the head should be covered. I would like to know all material —Quranic verses and authentic (not weak, not fabricated) hadith— on which the head cover ruling is based. If the ruling on head cover is a mere interpretation by scholars of the above Quranic verse, then I don't find it so convincing. To my understanding, this Quranic verse merely asks women to dress decently, to cover their bosoms fully, and not display any temptation in that way. If scholars were to say that showing the hair is a temptation, then what about the face and hands? If that is the yardstick used, then not a single portion of a woman should be visible. Please reply to my question, as a lot of people would benefit from it. Wa salam.

As you suggested, it is hoped that the answer would benefit many Muslims and non-Muslims who may have some misconceptions about hijab.

Before providing you with Quranic proof and wisdom behind the religiously mandated hijab, let us first define some Arabic terms related to your question: Islam, hijab, and khimar.

Arabic Words Have Many Meanings

Arabic is a language very rich in shades of meaning for every word; translations often fail to do justice to Arabic verses for lack of appropriate vocabulary. Consequently, it is necessary, when addressing controversial issues, to look closely at the meaning of the Arabic words used in the original context. Let’s start from the meaning of the name of this religion: Islam.

Islam means total submission to Allah—in mind, heart, body, and soul—total acceptance of His laws and rules without doubts or arguments, total obedience to Him and His Messenger, and total refusal of shirk (associating anyone with Allah) in all its forms. The Quran states what means:

Muslims should not argue the commands, rules, or laws of Allah and His Prophet (peace be upon him). They do not need proof from Allah for everything He asks of them. Their obedience is the mark of their true faith. In addition, Islam is a complete way of life that should be wholly adhered to by its followers. Thus, Muslims are not supposed to worship selectively, picking out whatever rules or rituals appeal to them and leaving the rest. Denying a basic Islamic rule or ritual is a serious sin.

Meaning of the Arabic Word Hijab

Hijab in Arabic means “barrier” or “screen” and thus it appears in various Quranic verses, referring to many things besides the woman’s head cover. For example:

Allah Almighty says in the Quran that He only talks to humans from behind a hijab. The Quran says what means:

{It is not given to any human being that Allah should speak to him unless [it be] by revelation, or from behind a veil} (Ash-Shura 42:51).

The Virgin Mary worshipped behind a hijab:

In all these verses, the Arabic word hijab was used to mean different things. In this light, let’s ponder the logic of hijab.

The Quran teaches us to look around us with open eyes and minds, to think, rationalize, and reach logical conclusions. If we look at the universe, from the tiny atom to the huge celestial bodies, don’t we see how everything important or precious is protected and concealed with a cover?

Think of the skin to the human body, the womb to the baby, the plasma wall to the cell, the bark to the tree trunks, the shell to the egg, even the entire planet we live on is enjoying the protection of a “hijab”—which we call the atmosphere—against the dangers of asteroids and harmful cosmic rays. Think how other planets—Mars for example— deprived of their “hijab” have suffered much harm.

Meaning of the Word Khimar in Arabic

The Arabic word khimar means “top-cover” and it also applies to many things besides women’s head covers. For example, it applies to the top covering a pot or jar, to any head cover worn by people even men. Notably, that’s where liquor and narcotics got their Arabic name khamr because they “cover” the reasoning when a person is intoxicated.

Khimar is the word used to prescribe the head cover of Muslim women in the verse you referred to. The Quran says what means:

The meaning apparent to the Arabic reader is that in the presence of men who are not mahrams to a Muslim woman, she should wear a head cover that extends long enough to cover the bosom, not that only the bosom is covered. Another verse in Surat Al-Ahzab clarifies this further. The Quran says what means:

{O Prophet! Tell thy wives and daughters, and the believing women that they should cast their outer garments over their persons [when abroad]; that is most convenient, that they should be known [as such] and not molested. And Allah is Oft-Forgiving, Most Merciful} (Al-Ahzab 33:59).

The Arabic word used here to indicate the cover is the plural of jilbab. Ibn Taymiyyah stated in Majmu` Al-Fatawa 22:110-111: “The jilbab is a cover which is large enough to cover the woman’s head and the rest of her body hanging from the top of her head.” 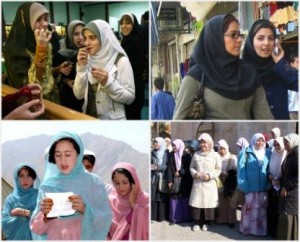 Further, the Quran instructs the Prophet’s Companions in words that mean:

{And when you ask [the Prophet’s wives] for anything you want, ask them from behind a screen} (Al-Ahzab 33:53).

The meaning of hijab in this verse is any object that conceals a woman such as a wall, a door, or clothes. The ruling of the verse, even though it was revealed concerning the wives of the Prophet (peace be upon him), generally encompasses all Muslim women. This is because the wisdom behind the ruling is specified in the remainder of the verse. It says what means:

{that makes for greater purity for your hearts and theirs} (Al-Ahzab 33:53).

This wisdom is general among all men and women. Therefore the generality of the wisdom also indicates the general application of the rule as apparent in surah 33, verse 59 above.

Islam uplifted women, gave them equality, and expects them to maintain their status.

The status of women in Islam is often the target of attacks in the secular media. The hijab or the Islamic dress is cited by many as an example of the “subjugation” of women under Islamic law. Yet, the truth is that 1400 years ago, Islam recognized women’s rights in a way that grants them the utmost protection and respect as well, a combination other systems fail to offer. Islam granted them freedom of expression, political participation, business and financial rights, and asked the rest of society to hold them in high esteem and offer them due respect as mothers, sisters, wives, and daughters.

{Say to the believing men that they should lower their gaze and guard their modesty: that will make for greater purity for them: and Allah is well acquainted with all that they do} (An-Nur 24:30).

The moment a man looks at a woman with any brazen or unashamed thought in mind, he should lower his gaze. The next verse of Surat An-Nur is the one commanding believing women to wear the hijab.

Islam expects women to maintain their status by following Allah’s rules designed for their advantage. Hijab is one such rule.

According to the Quran and Sunnah, there are basically six criteria for observing hijab:

1. It is obligatory for males to cover at least from the navel to the knees. For women, it is obligatory to cover the complete body except the face and the hands up to the wrist. If they wish to, they can cover even these parts of the body. Some scholars insist that the face and the hands are part of the obligatory extent of hijab, especially if temptation (fitna) is feared in times and places where Islamic rules are not prevalent or if security is scarce.

Complete hijab, besides the six criteria of clothing, also includes the moral conduct, behavior, attitude, and intention of the individual. A person only fulfilling the criteria of hijab of the clothes is observing hijab in a limited sense. Hijab of the clothes should be accompanied by hijab of the eyes, the heart, the thought, and the intention. It also includes the way a person walks, talks, and behaves. Therefore, the hypocritical use of hijab is not a good example of Muslim conduct. 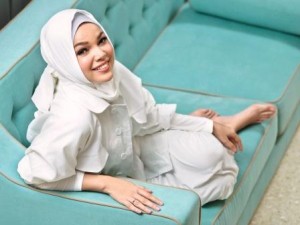 The Quran says that hijab enables women to be recognized as modest women and this will also protect them from being molested. Suppose there is a hooligan who is waiting to tease a girl. Whom will he tease? A girl wearing hijab, or one wearing a mini skirt or shorts? Hijab does not degrade a woman but uplifts a woman and protects her modesty and chastity.

Lifting the Veil Will Not Uplift Women

Woman’s liberalization mostly disguises exploitation of her body, degradation of her soul, and deprivation of her honor. Non-Muslim societies claim to have uplifted women via allowing them to expose their bodies, but on the contrary, this has actually degraded them to mere tools in the hands of pleasure seekers and sex marketers, hidden behind the colorful screen of “art” and “culture.”

Muslim women should be well aware of these facts. They should be aware that hijab protects them from evil glances and evil desires of those who are sick in the heart, as described in the Quran. Muslim women must adhere to Allah’s rules and not be persuaded or tempted by the media that opposes hijab or belittles its significance, as those who spread these ideas only desire evil for her. The Quran warns by saying what means:

{But the wish of those who follow their lusts is that you should deviate away [from the right path], -far, far away} (An-Nisaa 4:27).

I hope this answers your question and satisfies your inquiries. Thank you and please keep in touch.