aaa
Q Being new to Islam, I would like you to shed quick light on how the journey of Hajj (Pilgrimage) can heal one's spiritual self?

Short Answer: Hajj is a very good chance for pilgrims to stop for a breather. It is a chance to think about your life and to evaluate your past. This can be during Hajj by asking Allah to forgive your sins and to plan for a straight future, free from sins. So, Hajj is a spiritual and physical purification of the self.

The journey of Hajj can be considered as a spiritual and physical healing program or journey because it touches upon different aspects of the human self.

During Hajj, pilgrims have to wear a special kind of unified and simple form of clothes. This is known to be the clothes of ihram. These clothes of ihram—two plain strips of white, un-hemmed cloth—have a great psychological influence on the pilgrims.

Each Muslim takes off his regular clothes and exchanges them for the simple clothes of ihram.

With taking off the regular clothes, the Muslim also puts aside everything that these clothes represent; the profession reflected in a certain uniform, the culture represented in a specific fashion, the status reflected in the quality and price, and so on.

As for male pilgrims, they have to take off any kind of head cover as a symbol of putting aside any worldly rank or position. So, there is no shelter for the human head except the shelter of belief and obedience to the Divine.

The similarity of appearance gives the pilgrim the feeling of a lighter spirit and takes the mind to a much higher mood; becoming detached from all the worldly, materialistic glamour of career, wealth, position, and status.

Hajj is also a great meeting between brothers and sisters from all over the world. This gives the clear living example of brotherhood in Islam.

So, Hajj is a perfect treatment for people who suffer delusions of grandeur. Sometimes, high governmental positions, or wealth, or any materialistic aspect of life, make the person feel he is superior to his own brethren.

A Stop for a Breather

Hajj is also a very good chance for many pilgrims to stop for a breather.

It is a chance to think about your life and to consider or to evaluate your past. This can be during Hajj by asking Allah to forgive your sins and to plan for a straight future, free from sins.

The journey of Hajj can also treat many physical pains and illnesses, as well as spiritual ones. Physical activities, like tawaf, sa`i, and standing on Mount `Arafah, improve physical endurance and muscle performance.

These physical activities decrease the blood glucose level for diabetic patients. Drinking enough water from Zamzam improves the urinary system and helps to get rid of small stones in the ureters or kidneys.

So, Hajj purifies the person from inside, just as ablution cleans the body from outside. Hajj is a spiritual and physical purification of the self.

Also, this journey gives the mind a rest from thinking about too many things at the same time, and it makes the mind focus on only one idea, which is asking Allah for forgiveness. 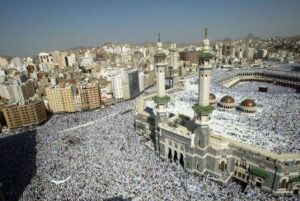 An Example of Steadfastness

Hajj is also an example of steadfastness when a person has chosen the righteous truth.

Pilgrims in their rituals remember Lady Hajar, when Prophet Ibrahim (Abraham, peace be upon him) left her in the dry valley where Makkah is, all by herself with her newborn baby.

This was when she asked him, “Was it Allah who ordered you to this?” He answered, “Yes.” She simply said what meant, “Then He won’t get us lost.”

This inner strength and steadfast belief in God’s ability and care for his servants which penetrated and controlled her heart is transmitted to the heart of each pilgrim throughout the rituals of Hajj.

Each pilgrim remembers our Mother Hajar running up and down between the two hills of Safa and Marwah while she was searching for a drop of water for her child. Then Allah provided her with His help and steadfastness by having the water of Zamzam flow from underneath the feet of her baby.

So, the assertion of belief that takes place within the hearts of pilgrims during this obligatory worship is a divine gift from God Himself. He has said in the Quran what means:

Allah confirms those who believe by a firm saying in the life of the world and in the Hereafter, and Allah sends wrong-doers astray. And Allah doeth what He will. (Quran 14:27)

And, in this obligatory ritual of worship we see Muslims raising their hands humbly asking Allah Almighty to give them their needs in this life. So, if they are rich they remember that their riches are a gift from God Himself.


Pilgrims also train themselves concerning patience in order to be able to complete the steps of Hajj. They raise their hands up, asking Allah to give them the virtue of patience. Allah has said in the Quran what means:

And the parable of those who spend their property to seek the pleasure of Allah and for the certainty ‘of their souls is as the parable of a garden on an elevated ground, upon which heavy rain falls so it brings forth its fruit twofold but if heavy rain does not fall upon it, then light rain (is sufficient); and Allah sees what you do. (Quran 2:265) 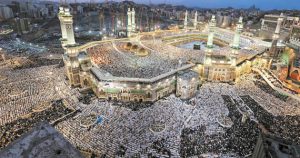 Here, the Muslim pilgrim overcomes such fatal spiritual sicknesses and is once again capable of controlling his or her worldly desires.

These are briefly some of the points through which the pilgrim can heal him or herself throughout the majestic journey of Hajj.

Thank you again and please do keep in touch.

(From Ask About Islam’s archives)

How Hajj Can Be a Model for Life

What Quran Says About Hajj Blessings

Hajj – A Journey Within and Without