aaa
Q Dear consultants, As-salamu alaykum. I’m a student and a firm believer in Islam. I just want to know if Islam says anything about friendship. Allah hafiz.

No doubt, Allah has commanded the Muslims to love one another, to take one another as friends, and to extend the utmost compassion and help to one another. He says in surah 3, verse 103 which gives the meaning of:

{And hold fast by the covenant of Allah all together and be not disunited, and remember the favor of Allah on you when you were enemies, then He united your hearts so by His favor you became brethren; and you were on the brink of a pit of fire, then He saved you from it, thus does Allah make clear to you His communications that you may follow the right way.}

{The believers are naught else than brothers.}

When we refer to one another as brother (or sister in the case of women), we are in fact referring to a relationship that is stronger than mere friendship. Our brotherhood for the sake of Allah implies a willingness to sacrifice our needs for the sake of our fellow Muslims’ needs in a manner that far outweighs normal sacrifice for the sake of friendship.

The Prophet (peace and blessings be upon him) has spoken extensively on the subject of brotherhood and friendship for the sake of Allah. Four such traditions from Riyaadh as-Saliheen appear below:

Abu Hurayrah (May Allah be pleased with him) narrated that the Messenger of Allah (peace and blessings be upon him) said:

“On the day of resurrection, Allah, the Exalted, will say, ‘Where are those who have mutual love for the sake of My Glory? Today I shall shelter them in My shade when there will be no shade except Mine.” [Reported by Muslim]

He also narrated that the Messenger of Allah (peace and blessings be upon him) said:

“By Him in Whose hand is my soul! You will not enter paradise until you believe, and you will not believe until you love one another. May I inform you of something, if you do it, you will love each other: Promote greetings amongst you (by saying as-salamu `alaykum to one another).” [Reported by Muslim]

He also narrated that the Prophet (peace and blessings be upon him) said:

“A man set out to visit a brother (in faith) in another town and Allah sent an angel on his way. When the man met the angel, the latter asked him, ‘Where do you intend to go?’ He said, ‘I intend to visit my brother in this town.’ The angel said, ‘Have you done any favor to him?’ He said, ‘No, I have no desire except to visit him because I love him for the sake of Allah, the Exalted, and Glorious.’ Thereupon the angel said, ‘I am a messenger to you from Allah (to inform you) that Allah loves you as you love him (for His sake).” [Reported by Muslim]

And Anas ibn Malik (may Allah be pleased with him) narrated:

Platonic love for the sake of Allah, i.e. Islamic brotherhood and friendship, is crucial to maintaining one’s iman (faith) in these trying times. Our choice of suhba (companionship) will determine whether we steadily increase in our iman or decrease.

If our friends and companions are knowledgeable Muslims of strong faith, or even older and wiser Muslims, there is no doubt that we will benefit immensely. 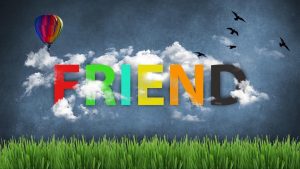 Of course the opposite is true also, such that if our companions are of weak faith and practice, then our iman will automatically lower to their level. iman is the most valuable commodity in the universe; it is imperative that we seek out those that will help us to preserve it.

Finally, the Sacred Law does not recognize nor permit “friendship” between men and women that is outside of marriage and familial bonds.

The interaction between sexes should be based on necessity and not on our desires to simply befriend members of the opposite sex. No matter how harmless these relationships may seem, there is an inherent danger in them, and Satan delights in our taking part in them.