aaa
Q Why do Muslims have this Eid (Feast) immediately after Ramadan? They keep fasting and praying long prayers for a whole month… and then… after they are done with that… they do not go and have fun… they go to pray… even in their feast!!! Why do you make prayers in your Eid? What is the wisdom of that prayer?? You worship even in your fun time?!

Establishing Prayer… Even in Eid?

What is really your concern here is that Muslims pray even in the midst of celebration, or “fun”!

To many people, especially in the West, the word “fun” evokes, for instance, the colorful images of the world’s biggest and grandest carnival in Rio de Janeiro or the Mardi Gras in New Orleans. They may also think of the wild revelries and partying they have during other festivals and fiestas throughout the world.

But, it is obvious that to people of another culture, fun and entertainment may have different connotations.

In fact, the concept of fun varies from culture to culture; and it is no wonder that people of one culture feel some sort of “culture shock”, when they confront people of another culture, having fun in a different way. Non-Muslims can understand the Muslim culture, only if they have some idea of the Muslim worldview.

Islam teaches that God has given us guidance through His books and prophets. Muhammad (peace be upon him) is the last of the prophets and the Quran is the final revelation and last testament of divine guidance.

Muslims are required to order all aspects of their life, in accordance with divine guidance, as well as the example of the Prophet.

For the Muslim, no aspect of his life is exempt from this existential understanding of the role of religion in daily life. His whole life is directed towards God, and he cannot do anything without taking into consideration whether God will approve of it or not.

The famous Christian theologian and a leading figure in contemporary moral Philosophy Paul Tillich defined religion as the Ultimate Concern of Man. A Muslim believes firmly in that. That is to say, all other human concerns should be subordinated to religion. This means that a Muslim cannot separate various aspects of his day-to-day life from religion; and celebration is no exception.

If happiness is the provision of the soul, how can it be exercised against its innate nature? Who would know that very innate nature and its striving for peace and satisfaction… better than the Creator of the soul, body and world?

The Muslim fast itself may be viewed by others as a little too harsh. But we can see that the fast referred to by Jesus in the Gospels must have been as “severe” as the Muslim fast (Matthew 6:16–18).

As Islam declares itself to be the latest and the most finalized form of the same message and religion taught by all prophets, including Jesus (peace be upon him), this is not surprising.

God commands that after a month of rigorous fast, the believers can rejoice and celebrate. But mind you, we should never ever forget God and His blessings. 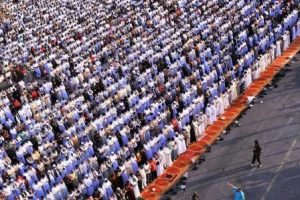 This is because the core of a Muslim’s life is devotion to God and eagerness to obey and show gratitude to Him.

For this reason, the core of the Eid celebration is prayer! All the festivities on the occasion are subordinated to the grateful remembrance of God…


This brings to the fore an important aspect of it all; the celebration of Muslims cannot go out of control. It is marked by decorum and restraint. Muslims can follow other models in celebration, only in defiance of the above principle.

This is because Islam strongly disapproves of people letting themselves go, as it were. Drinking, dancing, or pop music festivals are not relevant to the essence of Islamic socio-logic… or homo-logic either. Intoxication or wild enjoyment of any kind is just not the way of enjoying life a Muslim would pursue.

In fact, we can see a similar strain in the Jewish Pesach or Passover, and the Christian Easter, where the general tenor is religious.

Even in countries like Spain, where they make the most of the holy season (Semana Santa) with torch-lit processions and extravagant religious ceremonies, you cannot miss the religious atmosphere.

As for the Muslim, he should constantly remember God throughout his sober life. Since this is impossible, his duty is to strive at his level best to maintain a steady consciousness of God.

Now, what is the purpose of it all?

For one thing, a person who remembers God constantly is safe from error, from any sort of moral lapse. This is because the remembrance of God makes him strive to do the good and avoid the evil. This brings him the double blessing of the hereafter, along with that of the here-and-now. 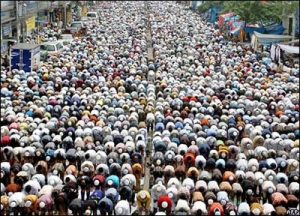 All activities of a Muslim, therefore are bound to be God-directed; and a Muslim should like to spend every moment of his life in prayer, if possible. That is due to the fact that he believes that this life is transient and his real destination is the eternal abode in the hereafter.

So, fun time is also prayer time, though it may sound… funny!

I hope this answers your question. Thank you and please send us any further question you may have.

What Is The Meaning, Significance of Eid Takbir?

How Can Muslims Celebrate, Have Fun in Eid?