el Corán fue revelado en etapas.
aaa
Q Dear Prof. Hameed, Surah 21 verse 30 says: "Do not the unbelievers see that the heavens and the earth were joined together before we clove them asunder". Due to a big bang theory we came to know that everything originated from one unit or one point. But in those days the unbelievers knew nothing about this information. Then why does the Quran ask them, " Don't you see this? Is this an error? In another verse Allah commands the heavens and the earth to come together willingly or unwillingly. They said we come together willingly. Is this not unscientific where Allah is speaking to inanimate things like heavens and earth? Thanks in advance - Mohsin.

The complete verse you have referred to is:

{Do not the unbelievers see that the heavens and the earth were joined together (as one unit of creation), before we clove them asunder? We made from water every living thing. Will they not then believe?} (Al-Anbiyaa’ 21:30)

As a matter of fact there is no scripture in the world that appeals to human reason as much as the Holy Quran. Many verses citing examples from history, nature and human experience end with questions like: “Do they not consider?”, “Will you not understand?”, “Don’t you see..?” etc.

Some of these verses refer to scientific facts that have come to light only recently, such as the one you quote. When the original recipients of the Quran read those verses, they must have understood them in accordance with their level of knowledge.

You can imagine how uneducated Bedouins might interpret verse 21:30. Some of them must have derived some meaning from it and believed in it unquestioningly as this was a revelation from God. But some others as you suggest, could not understand how heavens and earth could have been joined together as one unit of creation, and would have thought the idea to be a foolish one (God forbid). Such people continued to be unbelievers.

Today when modern man reads these verses, he understands their meaning owing to the level modern scientific research has reached. But does that mean that such persons immediately became steadfast believers in the Quran? Not necessarily.

Perhaps some of them would understand their full significance and recognize the fact that only God could be the source of those verses; and naturally such people would become believers.

The Quran is not specifically meant for the people of Arabia fourteen centuries ago. It addresses humans of all cultures and climes from the day of its revelation to the Last Day. And so we may expect its verses to appeal to people of all times.

As humanity progressed through time, the Quran was being understood more and more in the light of newer research and findings. Each generation discovered the Quran anew as it were, and new meanings and interpretations came to light.

For the above reason, it is only natural that Allah, the All-Wise, points out certain aspects of creation which can be better appreciated by the people of the present generation.

People who lived fourteen centuries ago at the time of the revelation of the Quran had no knowledge to realize the importance of those verses. And this only highlights the eternal freshness and relevance of the Divine Revelation.

We may also note one more significant aspect of the Quran. The question “Do not the unbelievers see that the heavens and the earth were joined together (as one unit of creation), before we clove them asunder?” serves an incentive for humans to do scientific research to find out whether there is any truth in this question.

Now that modern science has established the validity of the Big Bang theory, some of us may find this question rather superfluous. But is it really superfluous?

It is interesting to note in this context the view of the British Materialist H. P. Lipson about accepting evidences that support creation of the universe and living beings:

“If living matter is not then caused by the interplay of atoms, natural forces, and radiation, how has it come into being?… I think, however, that we must… admit that the only acceptable explanation is creation.

I know that this is anathema to physicists, as indeed it is to me, but we must not reject that we do not like if the experimental evidence which supports it.” * (H. P. Lipson “A Physicist Looks at Evolution”, Physics Bulletin, vol. 138, 1980, p. 138, quoted in Harun Yahya’s Creation of the Universe, last accessed Nov. 4, 2012)

This quote also explains the point that even those who see the truth need not embrace it wholeheartedly, unless they are sincerely seeking the truth. And Allah says:

{Soon will We show them our Signs in the (furthest) regions (of the earth), and in their own souls, until it becomes manifest to them that this is the Truth. Is it not enough that thy Lord doth witness all things?} (Fussilat 41:53)

You also referred to this verse:

{And He [it is who] applied His design to the skies, which were [yet but] smoke; and He [it is who] said to them and to the earth, “Come [into being], both of you, willingly or unwillingly!” – to which both responded, “We do come in obedience.} (Fussilat 41:11)

I quote here the commentary of this verse as given by the famous Quranic Interpreter Zamakhshari, quoted in Muhammad Asad’s The Message of the Quran:

“The meaning of God’s command to the skies and the earth to ‘come’, and their submission [to His command] is this: He willed their coming into being, and so they came to be as He willed them to be and this is the kind of metaphor (majaz) which is called ‘allegory’ (tamthil).

Thus, the purport [of this passage] is but an illustration of the effect of His almighty power on all that is willed [by Him], and nothing else.” (It is obvious that Zamakhshari’s reasoning is based on the oft-repeated Quranic statement, “When God wills a thing to be, He but says unto it, ‘Be’ – and it is.”)

Concluding his interpretation of the above passage, Zamakhshari adds: “If I am asked about the meaning of [the words] ‘willingly or unwillingly’, I say that it is a figurative expression (mathal) indicating that His overpowering will must inevitably take effect.” 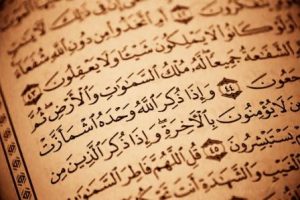 The foregoing means: Allah’s call to the skies and the earth and their reply are allegorical expressions about the act of creation. They are not to be taken literally or scientifically.

Anyone who has a cursory knowledge of literary language can see the difference between literal usage and figurative (or allegorical) one. It is figurative language that appeals to the imagination of the hearers or readers.

For the above reason, it is really simplistic to say that in the quoted verse, Allah is talking to inanimate things.