aaa
Q What are the patterns used in spreading Islam and the problems encountered? What are the consequences of its spread on politics?

Your question is one which is often surrounded by many misconceptions. Allow me to say that understanding the phenomenally rapid and wide spread of Islam requires in the first place an understanding of the concept of da`wah in Islam.

No Struggle to Convert

The Arabic word dawah means “an invitation” or “a call to share.” Therefore, dawah in its essence merely means the conveyance of the message of Islam to people.

Da`wah should not be understood as the struggle to convert people into the faith. Islam never declared the conversion of people to the faith as an obligation of Muslims.

{But if they turn aside, We have not sent you as a watcher over them; on you is only to deliver (the message); and surely when We make man taste mercy from Us, he rejoices thereat; and if an evil afflicts them on account of what their hands have already done, then surely man is ungrateful.} (Ash-Shura 42:48)

All Muslims strongly believe that their duties in da`wah are limited to the conveyance of the message. They also believe that embracing Islam is due to guidance, which only occurs by the grace of Allah.

{It is true you will not be able to guide everyone whom you love; but Allah guides those whom He will and He knows best those who receive guidance.} (Al-Qasas 28:56)

Performing dawah is governed by several guidelines. First, there is no compulsion in religion.

{Let there be no compulsion in religion: Truth stands out clear from error: whoever rejects evil and believes in Allah has grasped the most trustworthy hand-hold, that never breaks. And Allah hears and knows all things.} (Al-Baqarah 2:256)

Second, dawah should be practiced with wisdom and the best preaching.

{Invite (all) to the way of your Lord with wisdom and beautiful preaching; and argue with them in ways that are best and most gracious: for your Lord knows best who have strayed from His Path, and who receive guidance.} (An-Nahl 16:125)

Third, Muslims are not held responsible for the deeds of other nations.

The Various Stages of Dawah


Dawah went through several stages through the course of the history of Islam. In each stage, dawah was shaped by the existing circumstances, and its outcome affected the surrounding social and political environment.

The first stage of dawah was during the lifetime of the Prophet (peace be upon him). In the first few years of receiving the message, the Prophet began by calling people individually in secret.

The obstacles during this stage were the hostile reactions of the Makkan elites. Makkah at that time was divided into classes: elite, poor, and slaves. The elite of Makkah foresaw in the message of Islam a great threat to their political, religious, social, and economic status in Makkah as well as Arabia in general.

However, despite the hostile position of the Makkan leaders, the message of Islam gradually attracted not only the weak and poor of Makkah but many of the elite themselves.

Later, the call to Islam became public. The Prophet declared his message from the top of Makkan mountains, and began preaching the message and teaching the Quran publicly.

The elite perceived that as a public challenge to their leadership and social prestige, which their tribe, Quraish, enjoyed among the tribes of Arabia. The leadership of Makkah, therefore, reacted harshly and with no mercy.

Under these circumstances, the Prophet advised his followers to migrate to Abyssinia. This migration signified the first interfaith dialogue between Islam and Christianity. It also signified the first time Islam reached out to the continent of Africa.

The Prophet later migrated to Madinah, where Muslims became an organized community, and da`wah in Madinah took a different pattern.

The Prophet sent groups of his Companions to the surrounding tribes to convey the message of Islam and preach its values. Also, many tribes and individuals visited Madinah seeking information about the new religion.

The rapidly growing Muslim community in Madinah was viewed as a threat by Quraish. Consequently, Muslims and Makkans faced each other in military confrontations.

The confrontations ended with the signing of the peace treaty of Al-Hudaybiya, which was considered a clear recognition of the legitimacy and the power of the Muslim community.

This time of peace allowed Muslims to extensively travel among the tribes, preaching the message of Islam. It also encouraged the tribes of Arabia to visit the Prophet and embrace Islam.

After the spread of Islam among the Arabs, the Prophet started conveying the message of Islam outside of Arabia to the surrounding nations. The Prophet sent messages to the heads of the two superpowers of that time, the Roman Empire and the Persian Empire, calling them to Islam.

Both empires chose a hostile position toward the Muslim community. This hostility later led to several military encounters with Islam. As a result of the wars with the Muslims, the Romans retreated north, leaving Syria, Lebanon, Palestine, and the surrounding area in the hands of Muslims.

The war with Persia resulted to the collapse of the Persian Empire. It is important to mention that neither of the confrontations was meant to force people to convert to Islam nor to eliminate the existent cultures.

Historical evidence of this last statement lies in the fact that non-Muslim communities not only remain protected by Islam within the Muslim world until today, but are also involved in the public affairs of the Ummah.

Other regions of the world embraced Islam differently. The Indian subcontinent, South Asia, and many parts of Africa did not embrace Islam through the preaching of the message. They were attracted to the values and honesty of the Muslim traders and travelers they encountered.

Also, because of the great advances of the Muslim civilization, people from around the world traveled to study in the Muslim world mathematics, science, medicine, and other disciplines. 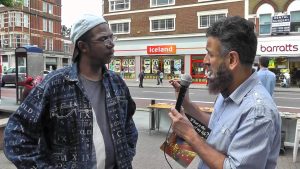 In conclusion, despite the different historical events throughout the 1400 years of Islam, dawah was the vehicle for spreading Islam. Dawah was not only preaching the message, but also practicing Islam’s values among people.