aaa
Q I am a recent convert to Islam and I am married to a man from Jordan. I would very much like to know what the proper etiquette and actions in a marriage should be? Basically what I should and should not do as a Muslim? Thank you.

When I first read your question I felt so sorry that my mother has already passed away, as she – in my opinion – could have been the best person to answer your question, through her successful experience with her husband and his family. She was formerly a German Catholic, who, after her marriage, reverted to Islam.

In the coming short paragraphs I will try to give you some insight of how she managed to deal with a Muslim husband with an oriental background.

She, God bless her, was actually so successful that on the day of her funeral, my father’s relatives agreed upon the fact that no one ever showed them, practically, how a Muslim wife should be, except her.

I’ll never forget her words a couple of days before my marriage. “Three words a wife should always bear in mind, if she is really asking the blessing of Allah for her marriage. Those are: sincerity, modesty and honesty.

Sincerity is a simple word, still really not so easily applied. This is proved in a prophet’s hadith by Asma bint yasid, when she complained that men have more chance to gain the reward of Allah through attending the Friday prayer, praying in mosques (attending collective prayer) and through jihad also.

Here, the Prophet (peace be upon him) told her that husn al tabaol (fulfilling all marital duties sincerely) is equivalent to all that she had mentioned.

In fact, my mother always proved that sincerity doesn’t just mean to fulfill one’s obligations towards a husband or his family. There has always been more to it, when it came to her. According to her, being a good wife, meant to know one’s husband’s needs, wishes, desires and ambitions. Then, to act accordingly, even before these are spelt out!

This simply means to be just, alert and attentive all the time. As a wife, you should always be there, whenever he needs you:

If he needs your sensations and feelings, you are there.

If he needs your spirit, to practice together some collective worshiping, like reading the Qur’an together, praying, doing some zikr, to assist one another on your road towards Allah, you are there.

If he needs your mind, to think with him or participate with him positively, in his career, for example, you are there.

If he needs your body, to satisfy his human emotional needs and desires, you are also there.
This is the only way, by which you may reach the position of being his one and all!

Well, this needs of course a lot of effort and time. It needs devotion and readiness to sacrifice. Isn’t the whole idea of “marriage” crystallized around the concept of sacrifice? Don’t you sacrifice your once enjoyed freedom, to do what you like whenever you like?

Don’t you sacrifice your way of life and your ability to model your future, the way you choose? Isn’t all that sacrificed in a marriage, for the sake of a union, with someone you love and are ready to share with, your present and future?

Also, if we come to Islam, you can be doing all that for the sake of gaining the reward of Allah in the Hereafter. This is through enabling someone to fulfill half of their deen (set of religious duties).

Now let’s go back to my mother’s experience, and her second important concept, to achieve a happy marriage: modesty.

My mother actually taught me, along with all those who knew her, that deeds are more valuable than sayings. Deeds have always been more effective and impressive than sayings. She did so much for my father and for the welfare of his family, but always with a modest spirit.

She always kept in her mind that everyone around her was watching her, in suspicion and curiosity. “How is this western woman, coming from so far away, going to deal with us??? She is – so they will think – trying to teach us, how cultured, how open minded and how advanced she and her people are!!!”

What you ought to do is not so difficult. Just remember the word modesty! Show everyone your modesty in action and deeds. Always remember that it is narrated on the authority of Abu Huraira that the Prophet (peace be upon him) said:

Iman (faith) has over seventy branches, and modesty is a branch of Iman.

It is also narrated on the authority of Imran ibn Husain that the Prophet (peace be upon him) said:

Modesty brings forth nothing but goodness.

On the other hand, Bushair ibn Ka’b said: “It is recorded in the books of wisdom. There lies sobriety in it and calmness of mind in it. 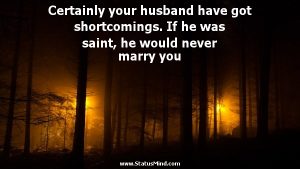 Every deen has an innate character. The character of Islam is modesty.

Also my mother always reminded us: “giving is receiving.” In fact, she always strived for Allah’s reward, for she really believed that no other worldly reward is worth waiting for.

Now let’s quickly jump to the third concept, which is the concept of honesty.

Never ever say a lie. By this, I mean, not even a tiny one. This is a guarantee to make you gain full respect and trust of your husband, as well as his family. Being honest, very clear and straightforward is very well advised in general, when dealing with a husband or his family.

In your case, you have to be aware and bear in mind that you are dealing with someone with what we call: “an oriental background”. This has got nothing to do with Islam, but with the cultural differences between his culture and yours. Understanding the oriental mentality will definitely need some time.

Here is a quick piece of advice for you: When you deal with your husband or his relatives – especially his mother – be honest, soothing and smart. In short, never use direct tough critique or blame, even if they are true. Just be clever in using your indirect comments.

Instead of: “You did it wrong,” you’d better say: “Let’s sit together and think it over again. Although I really do appreciate your efforts to reach a correct decision, but don’t you think it would have been better to do so and so …” Or you can use this one: “What about if you had done it the other way round …?”

Forty words instead of four, this is just wiser! As it guarantees to come 40 steps closer to his heart! Sorry if I sound weird and too open, but this is just the technique used when dealing with husbands, from an oriental background!

I am telling you this as it took my mother years and years to understand this different nature than hers. By the end, she simply followed the “rule” and became a “master”, teaching us how to do it!

Such technique is much wiser to be followed when dealing with your mother in law. According to Islam, she is the first to whom your husband is asked to pay respect. Mothers in Islam enjoy a very respectable status. Here is just one hadith, out of various others, proving this idea:

Thus, your respect and “love” to your husband must be reflected through your good manners with your mother in law. In our cultures, mothers in law are somehow – generally speaking of course – authoritarian.

This is actually one of the aspects that make the oriental family so peculiar. Now, practically speaking, how can you confront such a challenge?? There are just two terms that can help you out: “respect and Ihsan.” But what is Ihsan?

One day while the Prophet was sitting in the company of some people, Angel Gabriel came and asked: “What is Ihsan (seeking perfection)?” Allah’s Apostle replied: “To worship Allah as if you see Him. If you cannot achieve this state of devotion, then you must consider that He is looking at you.”

If your local culture has produced the notion: “A husband’s love is to be reached through his stomach.”, remember that in the Orient it’s often just through your respect to his mother and relatives.

At the end, I wish you a happy marital life, overwhelmed with the blessings of Allah. As we like to wish each other:

May Allah grant you with full happiness in this life and in the Hereafter.