aaa
Q There seems to be a consensus that such a marriage is unlawful, but all the reasons for the prohibition seem to be extra-Quranical and outdated. What if a man respects and tolerates the faith of a Muslim women and if she is independent?

Thank you for your question.

Naturally this question only arises in our modern context in which Muslims and non-Muslims are in interaction; people fall in love, and they want to get married; and now they are asking: Why can’t we?

For a Muslim man to marry a non-Muslim woman who is deemed to be a person from the People of the Book, Christian or Jew, many Muslim scholars say that this is permissible. However, other scholars say that it is makruh, which means that it is objectionable but not absolutely forbidden.

This is not necessarily a minority opinion; it is held by a large number of scholars. The Quran in chapter five, verse five says what means:

{This day all clean things has been made lawful to you. The food of the People of the Book is permitted to you. And your food is permitted to them. And permitted to you are chaste women, be they from among the believers, or from among those who have received the Book before you, provided you become their protectors in wedlock after paying them their bridal-due, rather than going around committing fornication and taking them as secret-companions. The work of he who refuses to follow the Way of faith will go to waste, and he will be among the utter losers in the Hereafter.} (Al-Maidah, 5:5)

This now at least refers to the Jews and Christians and it could refer to other communities as well who are based on a scriptural faith, as opposed to let’s say primal religions that do not necessarily follow what Muslims would deem to be a revealed scripture such, as the Old and New Testaments.

Because that permission was given in the Quran for men to marry the chaste women of the People of the Book, many think that literally it is OK to marry any Christian or Jewish lady.

Omar (may Allah be pleased with him), the second caliph, saw that this was happening a lot and the Muslim women couldn’t find husbands because the men are marrying other women, which happens now too, so he put a stop to that and some follow his opinion and say now it is not a good idea and so it is objectionable.

It seems to me that the best solution to this would be to say that those who are trying to follow their faith in a very intent manner and want their children to be brought up in the faith and so on, well then they should 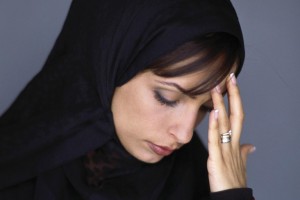 marry fellow Muslims because that’s the way of insuring that their children would be brought up in the faith; they wouldn’t be confused between this religion and that religion in the same household.

On the other hand, if people are not so connected to the faith, such that they can easily fall in love with somebody else; they find this to be welcome and possible, well then if they want to marry outside of the faith then they have to be aware of the consequences.

If they are not as committed as they are at the moment and they were to then marry someone from outside the faith then this will entail a lesser commitment at the household level. In what sense can we then expect the children to be brought up on the faith?

Men and women should be weary of going forward with such a commitment.

Interfaith marriages are generally not allowed in Islam except under certain conditions:

{Do not marry unbelieving women (idolaters), until they believe: A slave woman who believes is better than an unbelieving woman, even though she allures you. Nor marry (your girls) to unbelievers until they believe: A man slave who believes is better than an unbeliever, even though he allures you. Unbelievers do (but) beckon you to the Fire. But Allah beckons by His Grace to the Garden (of bliss) and forgiveness, and makes His Signs clear to mankind: That they may celebrate His praise.} (Al-Baqara, 2:221)

With respect to the Muslim man marrying a non-Muslim woman from among the People of the Book (Jews and Christians); Prophet Muhammad’s wife Maria was a Copt from Egypt. She later embraced Islam before their wedding.

It is permissible for the wife to maintain her Christian or Jewish faith even after marriage, however, because her Muslim husband has an acceptance and love for prophets Issa and Musa, peace be upon them, and the traditions of Christianity and Judaism.

Christian and Jewish men, on the other hand, are not required by their faiths to love or respect Prophet Muhammad (peace be upon him) or the traditions of Islam. We must consider who we are and why we wish to marry a particular person:

A non-Muslim man is in a position to enforce his will upon a Muslim wife. Although he may not be the type to hinder her from practicing her faith, or to force her to follow his religious traditions, there is the matter of raising children as Muslims or Christians/Jews.

If the man does not wish to raise his children as Christians/Jews, or does not care much about religion one way or the other, then she might ask herself why she would marry someone like that, unless of course, she is of the same mind. This is a type of kufr(disbelief), and “after kufr there is no need for discussion about sin”.

What we have to pay attention to is the word “chaste” in the above quoted verse (5:5). This means someone who did not have any sexual relationships before marriage; was divorced, or widowed and had only relationships within marriage.

It is the duty of the scholar or imam performing the marriage to read that verse and also inquire not from the woman because that would be inappropriate, rather from the man and to remind him of what Allah said in His book, which is to marry a chaste woman, whether Muslim or non-Muslim.