aaa
Q Hijab or veiling has become a very important issue throughout the world. My main question is about the way Muslim women dress today (e.g. Muslim women who wear jeans and cover their heads). Looking at the male gaze, hijab is to stop men from gazing when at the same time the jeans are saying “gaze.” There are many issues to come forward from this topic. Is hijab a matter of choice or not? Do Muslim women get forced to wear the hijab? Why do women spend so much money on fashion? How do the non-Muslims view the Muslim women? How does the western fashion and the eastern belief come together? In other words, how did fashion influence the way Muslim women dress? I will be looking forward to receiving your answer. Jazakum Allahu khayran. 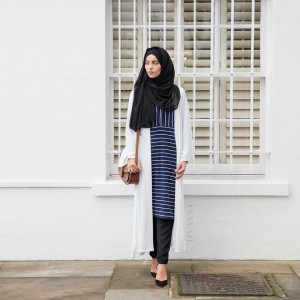 What Muslim women do now is try to fit in as many different styles and combinations within set parameters and guidelines through color, fabrics, and style of wearing the hijab. You will even find that during some seasons certain colors will be in fashion while in other seasons different colors will be more “in.”

Thank you for your interesting questions and for contacting Ask About Islam.

Recently, hijab has been the subject of much controversy and debate, especially since the French government decided to ban hijab and other religious “symbols” from public schools. Everyone wants to know what’s hijab all about? Your questions bring up many important points, which I will attempt to answer here.

In the beginning, you say: “Looking at the male gaze, hijab is to stop men from gazing when at the same time the jeans are saying ‘gaze.’” Yes, that is true. Some Muslim women do wear tight jeans and then cover their heads and say that they are wearing hijab.

Meaning of the word Hijab

This brings us to an important point—the meaning of the word hijab. Many people think that hijab means “head-covering” or “scarf.” If you look at any media, the word hijab is often accompanied by pictures of girls covering their head.

So what does hijab mean? The word hijab in Arabic means “barrier” or “screen.” In the verse regarding women’s hijab, which is referred to as khimar or “cover,” in the Quran, Allah says what means:

For more on the meaning of the word hijab, see:

Hijab… a Must, Not a Choice

Therefore, from the verse, it becomes evident that the purpose of hijab is to cover. Although from one point of view the girls in jeans and a head-covering may be “covered,” the Prophet Muhammad (peace be upon him) once mentioned that there are women who are kasiyat `ariyat, meaning they are both “covered and naked at the same time.”

This refers to those who wear clothes that are too tight or short or transparent and therefore reveal their bodies, thereby completely missing the point of hijab.

Modesty for Men and Women in Islam

In Islam, modesty is so important that there are several hadiths in which the Prophet highlights modesty as one of the main aspects of faith. However, modesty is a trait that is encouraged in both men and women, each manifesting this modesty in different ways.

Both men and women are requested to act with modesty by averting their gazes and lowering their voices. They are also both requested to dress modestly, but each with their own limitations. What is interesting is that although men are allowed to bare their chests down to their navels, because modesty is so important, it is very rare to find a Muslim man walking around without his shirt on.

So are those girls in jeans and a head-cover really wearing hijab as it was meant to be? No, unfortunately, they are not. They seem to understand the word hijab in its most superficial sense.

Is The Hijab a matter of choice or not?

You ask “Is hijab a matter of choice or not?” Well, the answer is yes and no. No, the hijab is not a matter of choice because it is a command by Allah that Muslim women should dress modestly from their heads to their toes, covering their entire body except for their hands and faces.

He tells us that He has commanded the believing women to cover themselves modestly from head to toe, but then leaves the choice of whether we will obey Him or not up to us.

Do Muslim women get forced to wear the hijab?

You also ask about whether girls are forced to wear the hijab or not. Again the answer is yes and no.

You will find some girls whose parents have more or less “forced” them to wear hijab, although this number, from my personal experience (there are no statistics on this) is quite small and decreasing daily.

Most women wear the hijab out of choice. Yes, there are countries such as Saudi Arabia and Iran which have “dress codes” and therefore are forcing women to dress in a certain way, but this is a political matter rather than a religious one.

When the Prophet Muhammad related verse 31 of Surat An-Nur, which commanded the believing women to cover themselves, the women of Madinah immediately went home to make appropriate covers for themselves out of their clothes. No one forced them to, and the Prophet certainly did not force them to—they did so out of their own free will. 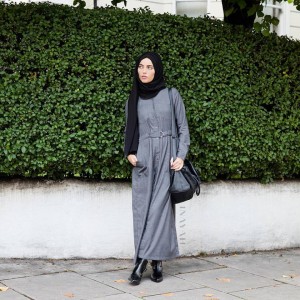 Why do women spend so much money on fashion?

Your next question, to tell you the truth, brought a smile to my face. You ask why women spend so much money on fashion.

Believe me, men have been asking this very same question for centuries and it is probably one of humankind’s unanswered mysteries.

Joking aside, when you look at today’s world and all forms of media—be they TV, movies, magazines, the Internet, newspapers, radio—they all send people in general and women in specific a message that highlights the external and ignores the internal.

Women are constantly bombarded with images of ultra-slim, sophisticated and expensively dressed models that are supposed to represent the happy, successful, content, and indeed, ideal, woman.

Girls are brought up in a culture where how they look and what they wear is more important than how they think or the excellence of their character.

They grow up believing that in order to be accepted in society and loved by people, they have to wear “fashionable”—and therefore, expensive—clothes that represent fashions that change with the seasons.

Allah does not look at our bodies and faces, but looks at our heart

One of the many beauties of Islam is that it frees us from this materialistic thinking. We are assured by the Prophet Muhammad that Allah does not look at our bodies and faces, but looks at our hearts.

We are continually told to take care of our manners and to build our relationship with Allah as the most important relationship in our lives—indeed the only relationship that really matters. We are told to purify our hearts from an over-dependence on earthly desires and undesirable traits such as envy, impatience, hate, and covetousness.

Yes, we are all asked to dress modestly and appropriately in clean clothes. And yes, Islam is a religion of beauty, as the Prophet Muhammad tells us in a hadith that Allah is Beautiful and loves that which is beautiful. However, outward beauty takes an inferior position to inner beauty.

It is the beauty of the soul and heart and mind that is valued more than external beauty. Allah asks us to take care of our bodies and to keep them healthy and clean, but He also tells us that this is not to be at the expense of that which is more important—our souls and hearts and minds.

How do the non-Muslims view Muslim women?

You also ask how people outside Islam view women who wear hijab. Again, I cannot give you just one answer, because there is always a multiplicity of reactions.

Some people believe that we are “oppressed.”

Some actually envy us for our freedom from the constraints of the fashion world.

Some are angry and feel hostile.

There are also some people who respect and would indeed argue for our choice to follow our religion.

In addition, there are people who admire us to the point of seeing the wearing of hijab as a strong feminist statement in that the woman who wears it is essentially saying, “I am wearing this hijab because I want you to look at me for who I am, and not look at my hair or body because I do not permit you to do so.”

How do Western fashion and Eastern beliefs come together?

So how do Western fashion and Eastern beliefs come together? The first problem with this question is that you polarize Islam as something Eastern, which it is not.

Islam is neither Eastern nor Western; rather it is divine and universal. It is not a localized phenomenon, but rather, it is beyond space.

Just because the final prophet of Islam happened to be Muhammad (peace and blessings be upon him) who was Arab, that does not mean that Islam belongs to the Arabs. The Prophet himself told us that there is no difference between an Arab and a non-Arab except by the piety of his heart.

Likewise, there is no difference between man and woman, between races, between nations, except by the piety of hearts. Those who are more pious are better in the eyes of Allah.

How fashion has influenced the way Muslim women dress

What Muslim women do now is try to fit in as many different styles and combinations within set parameters and guidelines through color, fabrics, and style of wearing the hijab. You will even find that during some seasons certain colors will be in fashion while in other seasons different colors will be more “in.”

Something that may interest you in this matter is the story of a non-Muslim Dutch designer who has dedicated a lot of her time to produce “fashion-friendly” hijabs.

There are other examples of this kind of endeavor, more obvious in predominantly Muslim countries, where women either try out different styles of hijab on an individual level, or where hijab fashion shows are held for women only.

I hope this answers your question, Hinna. Please don’t hesitate to write back with more questions.

How Important Is the Hijab?

New Muslim: Can I Wear Hijab Sometimes, Not Full-Time?