aaa
Q Dear respected scholars, My question is simply about raped women. I know that Islam doesn't punish a raped woman because simply it’s out of her hands. But some people say that they should be punished. Can you please tell me the state of the "raped" in Islam. Jazakallahu Khayran.

As the question mostly revolves around raped women, I would confine my answer to that point, without delving into the issue of punishing the rapist, on which there is no controversy that if it is proven, beyond reasonable doubt, that he is guilty of the crime, he will serve the punishment.

But I would like to make it clear that this crime can be proved either by confession or testimony or even through any modern means, thanks for the great revolution that has taken place in the field of science. This has made it easier for criminal experts to lay their hands on clear evidence that paves way for justice to run its course.

So what I am trying to say is that, contrary to what some Westerners claim, the issue is not just “bring four witnesses or set the accused free”. Shari`ah is not a legal system that keeps itself away from realities of life. Rather, it is practical in the sense that its mechanism of justice operates in a quite flexible way that makes all its precepts and rulings applicable at all time. Anyway, as I have said, I will not go into details on that now.

Moving to your question. Yes, sister, raped women are not punished in Islam. What punishment? This is like saying that a person robbed of his property should be punished.

It is a fact that, to be absolved from guilt, the raped woman must have shown some sort of good conduct, in the sense that what befell her must be something beyond her control. This is where Islam excels.

In dealing with a certain issue or addressing a certain problem, it brings forth a comprehensive panacea that uproots the problem and eliminates its causes. Rather than stipulating a temporary measure that will act as sedatives, Islam gets down to the root of the problem itself with the aim of uprooting entirely.

It sets noble codes of conduct that should prevail in the society; it addresses women to maintain their modesty, as not to open the door for evils:

{… be not too complacent of speech, lest one in whose heart is a disease should be moved with desire: but speak ye a speech (that is) just.} (Al-Ahzab 33: 32)

The above verse, despite addressing the wives of the Prophet (peace and blessings be upon him) actually, in an implicit way, calls upon Muslim women in general to preserve their dignity and modesty, just to save themselves from any harassment.

This injunction sounds more explicit in the following verse:

{O Prophet! Tell thy wives and daughters, and the believing women, that they should cast their outer garments over their persons (when abroad): that is most convenient, that they should be known (as such) and not molested. And Allah is Oft-Forgiving, Most Merciful.} (Al-Ahzab 33: 59)

This is Islam. As we have reiterated before, it does not hunt for crimes just to punish; rather, it works towards the means of blocking the avenues of crimes. Even when it punishes, it does not punish blindly; rather, it strikes the guilty hand.

So, for a rape victim to be absolved from guilt, she must not be the one that opens her house for robbery and her dignity for deflowering. If, after trying her best to resist the attack, she gets overcome by the assailants, she is totally absolved from punishment.

Muslim scholars are unanimous on this. They maintain that any woman, who, despite doing her utmost to resist these thugs and their ilk, is raped, is not guilty of any sin. This is since the situation is beyond her control, and anyone who is forced to do something is not guilty of sin. This is even in the case of disbelief, which is worse than zina (sex out of marriage), as Allah says what means:

“Allah has forgiven for my Ummah for their mistakes, what they forget and what they are forced to do.” (Ibn Majah – Sahih)

In showing reaction to this heinous crime, Islam takes into consideration the terrible effects it has on its victims. Most rape victims have their self-esteem diminished after an assault or abuse, driving them to be hunted by frequent shame, humiliation and loss of control.

This situation may even exacerbate to the point of making rape victims find it difficult to intimate with others. That is why Islam lays down certain strategies, which all in all, aim at soothing the rape victim, opening for her new channels of hope and survival.

Thus, Islam makes it clear that any Muslim woman who falls prey to a rapist will be rewarded for bearing this calamity with patience, if she seeks Allah’s reward for the harm that has befallen her.

“No stress or exhaustion befalls the Muslim, nor worry or distress, even a thorn which pricks him, but Allah will forgive his sins because of that.” (Al-Bukhari)

The society also has a role to play in rehabilitating the rape victim. Instead of deserting her or considering her a person non grata in the society, for the crime she has no hand in, Islam calls upon the society to rush to assist her in modifying and improving her life. We should show her the way out the pain of abuse. 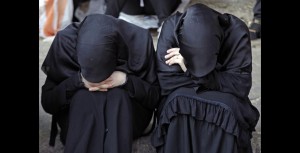 In light of this, many Muslim scholars, led by Sheikh Al-Qaradawi, have maintained that young Muslim men should hasten to marry women who fall as rape victims, so as to reduce their suffering and console them, to compensate them for the loss of the most precious thing that they possess. This reflects mutual love, rapport and altruism that prevail in the Muslim society.

This is, in brief, how Islam caters for raped women. Please keep in touch.