aaa
Q Thank you for your efforts in da`wah and jazakum Allah khayran. Why does Allah tell us in the Quran that men have one degree upon women ? I need to know this because that may help me and other Muslims to answer many allegations, and it may also help in da`wah. Thank you again.

Here, I am answering your question concerning the verse that means:

{And they [the women] have [rights] like [the obligations] they are under with beneficence, and men have a degree above them, and Allah is Ever-Mighty, Ever-Wise} (Al-Baqarah 2:228).

Careful reading of the verse in Arabic, and in the context of other verses, does not imply inequality. Rather, *{And they [the women] have [rights] like [the obligations] they are under with beneficence}* , as well as other verses, emphasizes the equality of man and woman in rights and obligations, in nature and mental characteristics, in responsibility and accountability towards Allah and His Message. For example, the Quran says what means:

{Then their Lord responded to them, “I do not waste the deed of any doer among you, any male or female. The one of you is as the other} (Aal `Imran 3:195).

{Surely the male donors and the female donors and [those] who lend to Allah a fair loan, it will be doubled for them, and they will have an honorable reward} (Al-Hadid 57:18).

We should understand that equality is something different from sameness. Actually it is the latter that the feminist movement nowadays call for, while Islam and sound intellect totally reject it.

Men and women are different emotionally as well as in physical characteristics and endurance. Hence they were naturally created for two different, but complementary, functions and roles.

This has been demonstrated by the variance of roles of men and women in all ages, civilizations, and cultures. The long history of humanity did not witness women prophets.

It would be absurd to ascribe this to male self-imposed supremacy or coercion. Rather one should ask: Why did Allah exclusively send His messages through men, unless this is His will and the norms of His creation.

The emotional character of women, their motherly instinct, and their basically tender, compassionate nature qualify them for their vital roles as careful mothers, affectionate wives, daughters, and sisters. Such roles are essential to form happy households, to raise healthy generations, and to create a closely-knit society.

Equally, men bear the major responsibility of earning for a living, harnessing and developing the resources of the earth, facing life hardships, and defending his family and the community against dangers.

A man is responsible to financially support his wife (even if she is rich), his daughters until they are married, his sons until they are able to support themselves, his needy parents, as well as other blood relatives.

To fulfill these major responsibilities, he should assume the role of leadership, and this is what is meant by “a degree above them.” Thus, leadership does not thus imply any sort of inequality or dictatorship.

In any egalitarian association between two or more persons, whether a family or a business or other human activity group, one should have the final word. The alternative is chaos or disruption of the association, sooner or later.

All this does not exclude exceptions—rather than the general norms—of women excelling in various trades and professions or having to bear the major responsibility of their households. 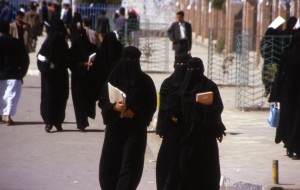 In another verse, the Quran clearly sets the leading role of men to be conditional on their capability to carry the responsibility of care and support. The Quran says what means:

{Men are the ever upright [managers] [of the affairs] of women for what Allah has graced some of them over [some] others and for what they have expended of their riches} (An-Nisaa’ 4:34).

May Allah bless you and guides us all to the truth.