darkBird/Shutterstock.com
aaa
Q Salam scholars… I have a couple of questions which I hope you don't mind me asking 1) Adam and Eve were thrown out of the garden of Eden as they ate the forbidden fruit. However, they repented and God forgave them therefore there was no such thing as the original sin. My question is, if God forgave them, why weren't they welcomed back to Heaven and placed on earth? 2) Is it true Adam and Eve took 40 years to find one another when they were placed on earth? Is there any verse in the Quran which states why?

The story of Adam’s disobedience to God and its aftermath is narrated in the Quran in several chapters. For example, we read what means:

{And [as for you], O Adam’, dwell you and your wife in this garden, and eat, both of you, whatever you may wish; but do not approach this one tree, lest you become evildoers.

Thereupon, Satan whispered unto the two with a view to making them conscious of their nakedness, of which [hitherto] they had been unaware; and he said: “Your Sustainer has but forbidden you this tree lest you two become .[as] angels, or lest you live forever.

And he swore unto them, “Verily, I am of those who wish you well indeed!” And thus he led them on with deluding thoughts.

But as soon as the two had tasted [the fruit] of the tree, they became conscious of their nakedness; and they began to cover themselves with pieced-together leaves from the garden.

And their Sustainer called unto them: “Did I not forbid that tree unto you and tell you, ‘Verily, Satan is your open foe’?”

The two replied: “O our Sustainer! We have sinned against ourselves — and unless You grant us forgiveness and bestow Your mercy upon us, we shall most certainly be lost.}  (Quran 7:19-23)

And since Adam was sincerely repentant of his error and sought forgiveness, Allah the All-Merciful turned towards him with mercy and forgave him. Allah, the Almighty says what can be translated as:

{Thereupon Adam received words [of guidance] from his Sustainer, and He accepted his repentance: for, verily, He alone is the-Acceptor of Repentance, the Dispenser of Grace.} (Al-Baqarah 2:37)

It is worthy of note here that the sin of Adam was forgiven by Allah. And so the concept of original sin — that is to say, the idea that the sin of Adam is inherited by all his children generation after generation — is ruled out. The expulsion from Paradise, though apparently punitive, can be viewed in the right perspective namely as a part of God’s design and plan for humanity.

{[For although] We did say, “Down with you all from this [state],” there shall, none the less, most certainly come unto you guidance from Me: and those who follow My guidance need have no fear, and neither shall they grieve.

But those who are bent on denying the truth and giving the lie to Our messages — they are destined for the fire, and therein shall they abide.”} (Al-Baqarah 2:38-39)

{Get you down (upon the earth), both of you, together from Paradise, some of you are an enemy to some others. Then if there comes to you guidance from Me, then whoever follows My Guidance shall neither go astray, nor fall into distress and misery.

But whosoever turns away from My Reminder (neither believes in this Quran nor acts on its orders etc). Verily, for him is a life of hardship and We shall raise him up blind on the Day of Resurrection.} (Taha 20:123-124)

Adam and Eve: An Allegory of Human Destiny

Now, your question is: After accepting the repentance of Adam, why God did not allow Adam, Eve, and their children to live in Paradise as before? 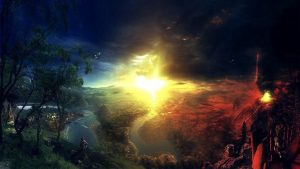 In fact, the story of Adam and Eve is an allegory of human destiny. It is a serious misconception that it is merely because of Adam’s disobedience that all of us his children are now living on earth.

{And when your Lord said unto the Angels: Lo! I am about to place a vicegerent in the earth.} (Al-Baqarah 2:30)

One important lesson Adam learned through his experience was that he was granted freedom of will, which he had to make use of, with a sense of responsibility.

Because, it was when he had misused his freedom to indulge in an act of disobedience that he was punished with the expulsion from Paradise; this was a lesson for him, and by this means Adam realized that Satan was his enemy.

Thus, we can see that it was part of God’s plan that a period of “probation” was granted to Adam on earth after he had fallen prey to the machinations of Satan.

During this period, Adam and his children would live on earth as free beings; that is to say, they would be given an opportunity to follow Divine Guidance that is sent to them from time to time or to follow their own self-willed ways, under the influence of the Evil One.

This is a test; and on the basis of the performance of the humans in this test, they will be admitted to Paradise or punished in Hell.

The Quran does not state that Adam and Eve took forty years to find each other on earth. There may be traditions based on the legends or stories derived from Israelites (Israiliyat) that mention a long separation between Adam and Eve.

This may or may not have some basis of truth; but we need not be concerned with conjectures or unauthentic stories, about these matters.

I hope this helps. Please keep in touch.

Adam, Eve, And Who Else?

Adam and Eve in the Bible and the Quran