aaa
Q Salamu alaikum dear scholars, this situation relates to me directly, I have a marriage proposal from a non-religious person who has agreed to accept Islam in order to marry me. (I use the word non-religious because this person has sound knowledge of both religions, but refuses to practice any) Though I am a bit skeptical at the moment he has assured me, he will practice Islam even against the will of his mother. I, on the other hand, want to keep my word/promise as I once told him that if he becomes Muslim I will marry him. Now he wants to pay the mahr; can he do that before becoming Muslim? This, I ask because he is expecting me to teach him the basics about Islam, stuff like prayers, etc. Please I need a comprehensive answer on this matter. Jazakallahu khair.

Thank you for your question and for contacting Ask About Islam again.

May Allah reward you for being keen in following His commands.

I advise you sister to let him accept Islam first without making it a condition for marrying you; in other words, if he does marry you, does that mean he will not become a Muslim.

The intention to revert to Islam must be purely related to conviction and faith, not to love relationships.  If it is the latter, the person will abandon Islam once this love fades away; and we have to take into consideration all probabilities.

From your statement in brackets, I am assuming that he has acquired knowledge about both Islam and Christianity, but yet does not practice any.

This is a bit worrisome since it implies that he is not a person who is keen about religion; therefore not a godly person to begin with. If he no interest in practicing any religion, what assures you that he will practice Islam after marrying you; this is something to keep in mind before taking the final decision.

Mahr is part of the marriage contract and is paid at that time; which means you will be legally married according to Islamic law if you pursue that route.  Since he is not yet a Muslim, this contract, if it takes place will be invalid since a Muslim woman may only marry a Muslim man. So please do not take this step yet for all the above mentioned reasons.

If he wishes to learn about Islam, you need to find him a brother to teach him. If there is a mosque nearby, take him there and make sure that they will teach him all aspects of Islam until he is well established in it. This might take sometimes, so he needs to take all the time necessary for him to understand and accept Islam from his heart.

I advise you during that time not to be in contact with him too much except to check on his progress, since you need to find out if he will truly accept Islam for Allah’s sake and not for your sake; religion before Allah has to be pure and with good intention. After all, good intentions followed by good deeds are what count most before Allah.

If there is no mosque nearby, the internet has plenty of sites for him to learn from including ours, AboutIslam.net.

Many reverts to Islam, due to their conviction, learned everything about Islam before meeting a single Muslim; some even performed prayers and fasted before fully accepting Islam.

It was a way for them to confirm that this is what they really want in life; when they took their shahada (declaration of faith), they became among the best Muslims and some even became Islamic scholars. Read some of their stories at our My Journey To Islam section.

If he truly accepts Islam, he seems to have a good prospective, since as you have implied that he already has good knowledge of Christianity and people like him could potentially become an excellent da’i (caller to Islam).

At the beginning, he will have many misconceptions and misunderstandings about Islam, so please direct him to our service, Ask About Islam, in order to clear all his doubts.

In general, men are more physical while women are more emotional; so as a man, I can tell you how men feel when they like a woman.

Also we have to be clear and make sure that the person has really good intentions.  If he does not, once he gets what he is looking for which is the physical part, he will withdraw himself slowly or will not cherish this relationship the way he should.

I warn you about teaching him Islam directly, meaning face to face, because that will be a great temptation for both you and him; Islam does not allow any relationship between men and women outside the bond of marriage. I am not talking about work colleague’s relation which is a necessity and is usually in a controlled environment.

Islam does not allow a man and woman who are not married to be alone in the same closed place; this of course excludes mahrams, people you cannot marry to begin with such as blood brothers, etc…

I also advise you to get to know the person better after he truly accepts Islam; meaning give some time before jumping into marriage and most importantly don’t be hasty.

I am not sure how well you know the person; so you need to know everything about him in full details; after all you are getting married for the rest of your life. Do this is a smart and gentle way so he does not repel.  This will prove whether he truly loves you are not. 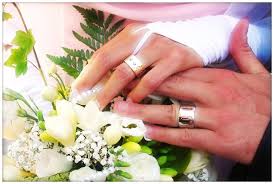 Hoping that his intentions are good then he will not have any problems following what I have advised above which is learning Islam from brothers and not from you, getting well established in Islam, and then proposing as a sincere Muslim who is looking to have a life-long relationship with a woman whom he loves.

From your side, make lots of du’ah (supplication to Allah) concerning this matter and perform the Istikhara prayer, the prayer of seeking guidance from Allah, since only Allah knows what is in the heart and have the knowledge of the unseen. The one who puts his or her trust in Allah will never be misguided.

It will also be beneficial to seek the advice of family and friends, those people who are closest to you; they will surely guide you in the right direction.

I hope this helps answer your question. If you have any further questions or clarifications, please do not hesitate to ask.